‘The UK chose to join the invasion of Iraq before the peaceful options for disarmament had been exhausted.’

This is what I said in My First Article in my columns in The Oman Daily Observer dated April 23 2003 – 13 years ago – titled – More Dangerous and Troubled Waters Ahead! This after the Iraq invasion. Also reproduced in My Books – see Images below!

The Article – Reproduced Below –

More Dangerous and Troubled Waters Ahead!

The Chapter aims to describe the different aspects and scenarios of the Gulf war. Compares the different Gulf Wars from a personal perspective and experience and the problems then in his old company on this, and foretells more troubles and dangers ahead (some which had happened and actually materialized later on). Start of the series to be printed in The Oman Daily Observer. Please remember this was written immediately after the Invasion of Iraq!

In the First Gulf war, family members were split between those who supported removing Saddam from Kuwait by force and those who did not the support war option but by ‘talk, persuasion and coercion’ methods.

I was expecting to start off this column  (after getting the  ‘green light’ from the esteemed paper) with light hearted and humour laced articles, but then the Iraq war dawned on us, and it took a dramatic turn to write something else on ‘the war’ instead!

Now those of  you who know me well would recall that I am not by profession or even by design a military analyst or military expert, or even a political expert one at that (if you can call being a Human Resources professional as is also involved in sort of  ‘wars’ between Management and Staff, and to draw a ‘thin line’ between getting your next salary payment (if you annoy the Management!) and to see ‘professionalism and ethics are played’ in dealing and in handling with staff problems, issues and grievances!)

However, I do read a lot of newspapers (at least 4 daily including from the UAE).  I watch BBC world, CNN, Euro News etc. and to get the flavour from the other side Al-Jazeera TV, Al-Arabi, MBC, LBC and other Arab channels.  So you may say ‘I am sort of informed’ – especially as I also spend at least 2 hours a day on the Internet – glossing and grouping all the news from different networks.

So please forgive the layman’s views on what he considers ‘his informed opinions and ideas on this war – though I can hear it being said – ‘Those of you who think they know everything, are upsetting those of us who know that we do!’.

It was in the first week in January 1991 when a great meeting was held in my previous company to vet opinions of senior staff in Human Resources of what were the ‘options’ of the company then, especially vis-à-vis Expatriate Families and their possible urgent evacuations from Oman, especially ‘those families who will want to leave at a hurry!’.

I was the sole voice who said that we should prepare for the war and the contingencies in retrospect. I got on a scare technique to frighten expatriates (or was it I was anti-expatriate?) – and the beating up the war ‘drums’.  On the 17th January, 1991,  I was vindicated, as the great Company had to go on a ‘panic run’ when expatriate families wanted to leave out on the next quickest available flight out of the country.  Then everybody said “we should have listened to M!” – let alone that day after the meeting – I was the loneliest person on the face of the earth with even my peers colleagues turning up against me! I felt like sinking into the ground – and became so sick and had to go early back home!

Nobody had asked me to this day.  Why I was so sure or convinced that there would be a war?.  You may ‘call it gut feelings’, but I think it was more intelligence, sense and reason related – because you do not issue ultimatums to ‘powerful (bully!) figures’ like Saddam – and expect him to follow it!

Then this Third Gulf War.  At our usual Friday family gathering, again I was the sole person who said ‘there is going to be a war’ and we had better be prepared for it!

Again one or two of my family members (this time, as no longer working – Early Retired, Voluntary that  is!) ‘There he goes again war-mongering – if he says it, it will happen!’ (Somebody should shut him up – unsaid!). The war came again, as I had predicted.

Again it was a question of ‘intelligence, sense and reason’ prevailing.  It was not a question of ‘weapons of mass destruction’ (WMD) – it was simply and smugly put – a question of removing ‘the threat of Saddam rule’ in Iraq. Threat to whom? That is still a million dollar question!

Nobody noticed the small print at the bottom.  ‘Even if, Saddam will leave, the ‘Allied’ Forces would still go in! Or I think it was Qusay, son of Saddam who had ‘admitted that we did have WMDs before, but not anymore’.

They always say in wars (or near wars) the first  casualty is the ‘truth’ and all that goes with it!

Another comparison between the 1st Gulf war and this one, at least on ‘circles’ I know well – that is my friends peers and family!

In the First Gulf war, members were split between those who supported removing Saddam from Kuwait by force and those who did not support the war option but rather by talk, persuasion and coercion’ methods.

This time though some may not be too keen on Saddam, but they were all against it with no exception, including the kids who are favourite of  Kentucky Fried Chicken, Pepsi and Cola, Showtime, Orbit, American films etc. Of course do not forget the Dodge Durango (and previous Pontiac Bonneville) parked outside the villa!

This should be very ‘telling’ on the ‘Allied’ Forces what peoples in the streets think – , including the so-called vast silent majority’!

QED – I rest my case – with all happening around us now – 13 years after The Iraq Invasion! 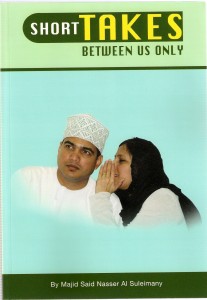 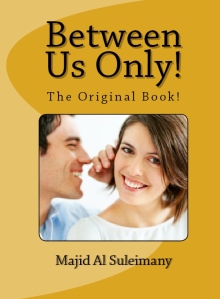 Between Us Only! The Original!

To Order this book directly –

The original book was published on around May 2003 in Oman by Al Nahda Printing Press.

Surprisingly, despite several books later – there is still a large following who still think that this was my Best Book! I would not know – but surely it was My First Book! Compiling all my articles in my columns then Between Us Only! And At My Workplace in The Oman Daily Observer!

You can still find this book still in many offices in Oman – and that is really touching to me as The Author! The other day my brother in law MYS was ‘scolding me’ that I should have translated this book into Arabic – instead of the book Arabic – Behind The Wheel! – www.createspace.com/4875352  He is one of my most advertent Reader and fan!

As there are only few copies left circulating around, I thought it fit to preserve the works by redoing the book! I was debating to add pictures and images – and to sort out by topics – but in the end decided to try as best as to add some images in! The aforementioned were ‘the usual pointers and complaints’ mainly raised on the book. The first book was sponsored by The MB Group of Companies and carried their Corporate Logos.

Many of the articles talk of increasing extremism, fundamentalism – of plain evil etc. – and the tear and wear – the breaking up of The Society Fabric! 13 years later – The Truth arises – and what is most astonishing (shocking!) is that most of the things I had said and predicted then had come to pass! And still folding – and as prevailing relevant too – to date!

It was always my dream to redo the book on my own! Today that dream has become a reality! I hope you will enjoy reading the book again of past memories – a sense of Déjà Vu!

Despite strong temptations, I decided just to stick to make the book as best same as The Original version! I have used the book image of The Sequel book as front cover for this one – because honestly I did not like the previous one of boy whispering to boy – and thus an opportune time to redo it!

Tell me what you think!

The Author is an ex-retired now Management and Human Resources Consultant, Advisor, Expert and Professional with over 40 years experiences in companies in Oman and GCC. He has published 21 books before this one – see http://www.myownmajid.com

Lives in Muscat in Oman – married with grandchildren.

Writing has been his passion and hobby from the age of 14 years old and his first essay had won a National Competition at this age. He has been writing wherever he was – from Schools, Colleges, Universities and Company Magazines and Newsletters! He is also a noted and famed Columnist where many of his books originate!

His famous quote is always – Writing is the only profession where no one considers you ridiculous if you make no money! – Jules Renard!

More about the Author here – www.myownmajid.com