OUTPOINT – The Pensioners and Retirees being focussed and concentrated here are those mainly in PASI where they have No Medical Insurance Cover as it is being understood.  The Writer stands corrected if it is otherwise!

I think it was Pervez Musharaf ex Pakistan President who said that Pensioners need food, housing and shelter more than anything else compared to high rise buildings big projects and infrastructure etc.
It is well established that these Pensioners and Retirees have been loyal dedicated contributors to the Nation building and Renaissance to what it is today! There is a saying that in a house where the Elder is respected and treated well, than there comes blessings to that house!

Especially Pensioners and Retirees pre 2014 are suffering to make ends meet as the article by Saleh Sheibani has also explicitly revealed last week in The Oman Daily Observer!

With a few exceptions like PDO, Central Bank, Defence etc. where Pensioners and Retirees can still get full Medical attention – but that too there are some few differences in some of the places in comparison to the still working Regular Staff! But even here and in some places are limited only to the Staff – and not his family!

It is true that like places in PDO, they have gone a long way of taking care of The Pensioners and Retirees by giving them equal facilities, services and treatment in The Company Hospitals – and can be referred to outside hospitals for Specialist Diagnosis and Treatment – but this is an exception to the rule where many other Retirees and Pensioners are not so lucky! Indeed, PDO Pensioners have to be grateful to The MD Raoul Restucci and The Chief Medical Officer – Dr. Suleiman Al Rawahi in this regard – with weekly Consultants in different areas of Medicine visiting the main Company Hospital in Mina Al Fahal.

In the same instance in a few years down the line and in years. in the other places where these things are not there, the same staff will face the same situation and circumstances – poetic it be for those now managing, monitoring and administering the policies and procedures!

People cannot afford The Private Hospitals with hidden costs in diagnosis and even in treatment – and going abroad is even more costlier and expensive – and only few people can afford to do so!

With also now the more stricter processes of admission in Emergency sections in Public Hospitals – and longer queues to be seen and for follow-ups in Operation Departments – and those who are the more sicker lots are even more at disadvantaged and suffering even more! Sometimes people prefer to suffer in agony and silence at home than to try admission in Public Hospitals – even in the Emergency wards!

Even in the regular check-ups and follow ups in the Public Hospitals can now stretch anything from 3 to 6 months – sometimes even longer due to the congestion of patients vis-à-vis available services to provide! Even the Medical Staff are stretched by overloads of work and the numbers of patients to attend to and in provision of services required!

It is also well established that the older generations of over 50s are also growing up equally fast in comparison to the other generations – with many younger generations still looking for jobs and to get married and to settle down – with exorbitant costs in dowries and marriage celebrations that can even stretch to OMR 20, 000 in some few cases! Which is a heavy load to the average working youth – who prefers to wait longer before getting to even think of getting married!

Far Eastern countries like Malaysia and Japan treat their Elders with respect and in best provision of services – in even offering them jobs like Advisors Consultants Mentors etc. – or in part time jobs or working from home! All these are not available to the home Pensioners and Retirees with very few exceptions!

Most of the Elders Pensioners and Retirees can still contribute to the Nation – if the opportunities and chances are given to them! With these extra money in their pockets they can serve themselves better including their families too!

It is also well established that if today there were Elders Old Homes Take Care Centres, a considerable number of The Retirees and Pensioners will be dropped in these places by their children! Many of The Pensioners and Retirees stat alone – with only few exceptions that you will find accommodated at their children homes!

There are even some rumours of same old aged Pensioners and Retirees being mistreated by their children who see the grandparents – or even parents – as a burden that stops them from enjoying life and freedom – or perhaps the nagging part and the constant need of attention emanating from The Retirees and Pensioners!

There have been many cases of the Retirees and Pensioners of not being able to get money and support getting money and support from their children – perhaps because they have put their lives to higher costs and expenditures beyond their means! Saleh Al Sheibani also wrote some years back on this particular dilemma facing The Young Workers now – with some with very good salaries and benefits – but end by mid month with no cash for even basic needs and requirements!

It is well understood that in the current economic situation it maybe difficult – or I would say harder to do – but the point needs to be said as in my introduction of the loyalties commitment dedication services etc. given by The Pensioners and Retirees – and it is high time that their lots and conditions are looked into – especially in seeing they are treated as Pensioners Retirees Post 2014 – and in provision of some Medical Insurance for The Retirees and The Pensioners for those not able to get Medical attention and care! 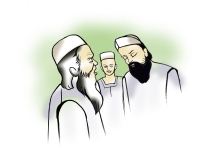