Just Trying To Explain It – Finally!

I do not know about you but lately I have been too much worried and concerned about the number of young people that I know that have died violently mainly due to traffic accidents. It is not only a wastage of National resources and potentials but the scars, pain, hurt, deprivation and feelings of lose that they leave behind especially to their especially parents, family and friends is grave and unbearable. Yet you still see them on the roads continuing unabated – and the sad tragic irony is that more elder peoples and even the fairer sex have joined in the melee. It does not matter which size or what car one drives – but I notice that it is mainly those in the smaller and in the sports cars that are mainly responsible – though there are those too in the bigger vehicles and the 4WD too.

I then sit with my neighbour and friend BA and we discuss about how many of our friends that we went out together on early retirement to abandon ship that had died so far. I count 15 I tell him, and then we check out the names – and he is right that I had missed two and his numbers are correct. They mainly went the natural or sick way, thank God at least! So we compare notes still further – and I ask him – are you afraid and scared like I am? He looks me straight at the eye and says – we all have to go one day, and I take each day one by one as it comes – and I may be afraid but there is simply nothing you can do about it.

But just try to do all the good you can before your time comes – and try to be friendly and forgive as best as you can to those that had been as adversary and confronting to one in life before – whether by purpose intentionally or by default! We discuss together on the notion that over 35@ of people that take retirement die in the first 10 years from retirement – perhaps due to boredom, despair and disappointments – or simply because of antipathy and frustrations in the new lives they now meet!

Then we recall how we too used to have exchanges in our time together. Strangely and coincidentally, we have also been neighbours in the same Department and Offices for the last 10 years in our career life. I had even taken over his job responsibilities of being in charge of the Company accommodation allocations to staff – mainly expatriates – whilst he was moved to other job aspects. Then he tells me – did they ever tell you why they gave you this added responsibility to your job aspects?

I feign innocence – and then he tells me – nothing new, as I have heard it all before! So I tell him – you know what? Great Madam Apple of my eyes always mocks me with this and other slogans of credit and praises given to me – what has it helped you or assisted you in your career, future potentials and prospects? Nothing except bad things that had brought you down and being looked down by those in decision making!

And that you operated outside the system rather than being inside to try to make changes from within as part of the system – rather than from outside with dismal and poor results – albeit being famous, well liked and popular from outside! But by peoples that cannot do anything for you, or you to gain anything from them! You are the loser – not them! – She adds in the salt to the wound! It hurts me more!

Then my friend tells me! This is something I have never told you before – but I will tell you now! You know people really respect, admire and adhere you – even those against and that are adversary to you – because you stood out to speak the truth. You fought for the under dogs and the victims at danger and loss to yourself. You always were ethical, professional, principled and equitable. You treated everyone fairly and ethically, with no bias, discrimination or favour. Whether Omani or Expatriate – and with no colourings, polarizations, creed, race or religion – everyone was treated equally and fairly by you! Is that not something as a credit or achievement?

I then tell him No – according to Madam’s books and estimation. I am seen as sacrificing myself and my family for ‘lost causes and purposes’ – and those that I stood up for, tried to defend or cared for did not bother the least after what they could get as a result from you. You were just judged as someone out on lost cause (the rebel without a cause syndrome!) and out for a convert popularity contest that went off quite badly – and the losers were you – and nobody else. Only you made your family especially suffer in the process – and even those that you stood up for and fought for saw you in vain and weak and naïve – even bordering stupidity too – and this time it is chilies too added to the wound – not just salt! Even the family think like me – she adds in!

I then try to defend myself. I am a Believer; I try as much as I can to be one. In the books it goes – You have three stages to make changes. The highest level is making the changes if you can do that yourself (have the authority and power to do so). If not then you go down to level two – that is trying to cause change by speaking and acting out against it. But if you cannot do that – then the lowest level is the third one of saying to your heart you are against this – but are afraid and scared to do anything about it – leave it all in your heart and inside you only. Outside you go along – or just doing your job by following orders! Leave the rest to Almighty God only!

There is also this saying – only dead fish go with the tide. So I say to her – I have never gone down to level three ever before in my life, I ended up best at level two only. Give me my life all over again – and in most likelihood I may repeat myself and do the same things all over again. I want to go and sleep at night with a clear and clean conscience. For sure if I cannot help or assist anyone for any particular reason, I will tell that person transparently clear – and even explain why. But certainly, I will NEVER go out to purposely hurt, pain and disadvantage someone for gaining any points, advantage or popularity. That I will never do. And if by default, I will come out to apologise – and try to remedy and correct!

Then I remember so many that had advised me – great high profile peoples that I need to use their titles first before I call them by their first names even – M – Do Not Change! You are unique and are different – one of a kind – remain as you are. If in private so many CEOs and – so many Chairman and Directors have told me the same – something must be right here somewhere! Madam must be wrong – and maybe it is all due to this fight where everyone says wrong things to only make a bad situation only worse – you be the judge!

That is me – and I will never change. Especially now at this stage. Take me, as I am – nothing less – and nothing more! Take Care!

First Written For My Column Between Us Only! The Oman Daily Observer – October 4 2009 – 9 years ago! Just imagine! 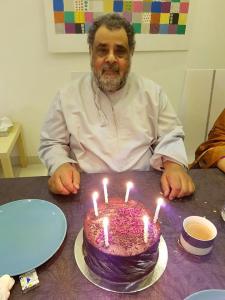