All About The New Books!

Saying It As It Is!

From The Between Us Only! Columns

For those Readers that may still remember and know it – my first article in this very same column had started in April 23rd 2003 – over ten years ago! It was titled More Dangerous and Troubled Waters Ahead! – and was after the Iraqi invasion. It seemed that it was an omen, forecast and premonition of things yet to come – so many years later – when the world now has become a very dangerous and difficult place to live! I remember one Iraqi citizen telling Al Jazeera Television – We suffered during Saddam Time – but there was a sort of general safety and security! After the invasion – we suffered far more – but this time there was neither safety nor security either!

We can also see how unsafe and dangerous the world is now – when children fear death and destruction coming out from the skies – whilst they sleep in their hut dwellings! That some people can become so ungrateful that they can reign down harm and destructions to the same country that had welcomed them in as refugees! And nothing is safe – even sports! Good decent people all over the world who had everything and to look for in life – now facing bleak futures – losing all they had possessed and living homeless and without!

And like in my last article – how so many tents for refugees and displaced peoples have sprung up all over the world! Yet the very same people that had caused or contributed to all these still write books – where they do not show any compunction or reflections of being sorry or apologetic! And have even now mausoleums and libraries built in their honours! Human beings are very strange species and creatures! 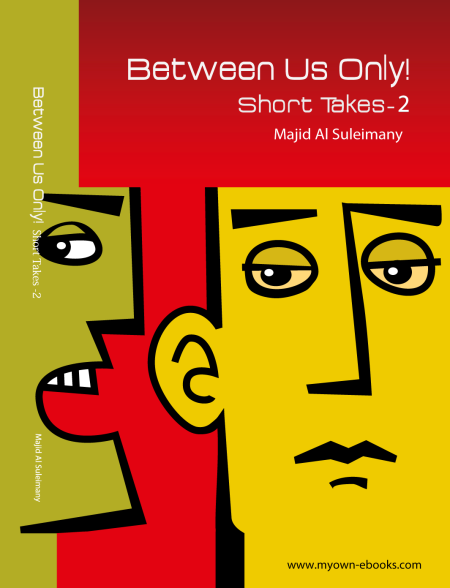 Anyway, this week my two new columns books have been released – titled Between Us Only! Short Takes – Two! and Between Us Only! The Sequel – Three! – that is books five and six respectively of the books series. – covering column articles of the past four years! This is what they all had said – and sharing with you today. More information here and at www.myown-ebooks.com

A From The Books Publishers

Back again for the next installment in his critically acclaimed series, Majid Al Suleimany offers a new collection of articles that deal with the delicate matters that many are scared to touch. Adapted from his successful newspaper column in The Oman Daily Observer, the enlightening and educational articles of Between Us Only! Short Takes – Two! cover everything from human suffering and social trends to divorce and prejudice. Touching on some of the social evils prevalent in today’s society, this fantastic collection uses a mixture of witty observations and heavy blows to get its point across.

The varied and honest new collection of articles cover a multitude of topics, from light-hearted and entertaining stories to serious topics based off of universal societal issues. Full of interesting and educational articles and stories, this wonderful book is a captivating experience, especially for readers familiar with Arab customs, traditions, heritages, and legacies.

A fantastic read for everyone from CEOs to students, Between Us Only! offers insightful and illuminating articles based off of a variety of topics that even apply to children, teenagers, and grandparents. Filled with varied topics that will entertain and inform readers of all backgrounds and walks of life, this eclectic collection will engross as it inspires and provides a wide range of knowledge on a multitude of important topics.

Developed from weekly columns Al Suleimany writes, Between Us Only! follows up on the success of the previous books in the series and furthers the idea of private talks between friends on matters that many are too scared to touch. Often times delving into topics that aren’t always sweet, this enlightening book uses a clear and elegant prose to explore social evils in society as well as their light hearted counterparts. Covering a variety of priceless topics, this wonderful collection of articles gives readers everywhere a glimpse into the issues that are prevalent in today’s society

Al Suleimany (Being the Safe Driver!, 2013, etc.) collects his wide-ranging columns from the Oman Daily Observer (an English daily) into one volume.

Subject matter here ranges from Omani politics to social ills, workplace life and religious reflections. Of the book’s purpose, Al Suleimany writes: “It is hoped that people will buy this book for the greater cause of people talking and communicating to each other—and in building tolerance, patience, understanding, love, togetherness and oneness in humanity—as the main theme and focus of this book—and in spreading these universal messages to mankind.”

He treats each disparate topic with the same sensibility, keeping his stated purpose at the forefront. With a tone by turns admonishing and casual, he manages to make moral pronouncements without coming across as condescending or pedantic. Many of his moral concerns center on matters of etiquette, both in the workplace and at home. He writes, “As a human resources professional and consultant, even I have found dealing with family members as the most hard, complex and difficult in comparisons! (sic) Jobs are definitely much easier!”

His opinions are informed by his religion; for instance, in a discussion of debt, he reminds his readers that the Surah II Al Baqarah reads, “If the debtor is in a difficulty, grant him time till it is easy for him to repay.” The profusion of articles is arranged alphabetically by topic, with a table of contents. Despite the status as a collection, the work is more or less disjointed; often, it’s not immediately clear what topic a particular piece seeks to discuss. What redeems the disorder, however, is the force of Al Suleimany’s personality, which comes through in every article, no matter the topic.

A well-rounded perspective of Omani life. Indeed, this is a great write from a great author in the Middle East.

More information here and at www.myown-ebooks.com