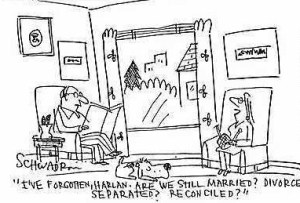 All the problems start from men. When the family starts life the man usually has nothing and gets all support from a wife either directly or indirectly from the early days. At the moment he accepts that and be happy to have support,
promising the better future for all of the family. The children are their children and the problems are their problems. When days go along the man starts to rethink and plan and picture for his future alone.

His selfishness traits become to show up. Whatever they had earn during their married life belongs to both equally as they have struggle together and the wife has probably sacrificed a lot but when the corn is ripe and ready to be harvested the wife become useless wife, nagger, inpatient, argumentative, lazy, spend thrift, selfish. Jealous and not sexy anymore and the list goes on.

All the worst negative characteristics are thrown to the wife and the man becomes irritable an impatient to whatever comment that comes from a wife and they start argument. The reason there is another young girl or divorcee and
someone’s wife who is ready to leave her good for nothing husband and tolerant everything and make him happy.

The pity is that man knows very well that it’s their money they are after yet they are ready to throw away all those precious yester years of happiness for the temporary pleasure. They marry a second wife and abandon their family totally. So long as he is happy and enjoying the pleasure of another woman that’s all that matters.

We have seen many and they are now on medication rejuvenating their vigour to satisfy the young one while killing themselves in the process. They become tense thinking that the wife eats his money and having affairs behind their backs. Which is true sometimes, Who wants a overweight snoring, flabby fleshy man sleeping beside them? They want money and security before and after their
deaths.

Let men suffer because the guilt they carry will kill them slowly. Though they pretend to be happy but rest assured they are not. A time comes when the old wife would have been more handy than the young wife who still wants to enjoy life while they are now  permanent members of outpatient clinic recharging their batteries and looking for spare parts.. 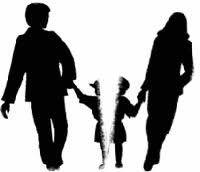 Many of us brother Majid are inpatient and eager to see changes for the better.

Ladies don’t accept difficult situation and they demand to be the same as used to be or even better, so does the males don’t accept changes for the worst on their ladies side.

Cases start with simple argument, for example one of the members became old while the other doesn’t accept , hence argument start and get steered up .

No one willing to restrain and step back for the sake of the family.

Majid do men read your articles? They are the main culprits. I love it. Thanks

From Another Lady Fan (Omani)

If what you are saying is true, and you practise what you preach, then your wife is a very lucky woman. But knowing us women, many of us do not. Until it is too late J

I think you are talking of families in Muscat more. We do not have such problems still in other places in Oman – especially in the Interior. Women still fear their husbands!.

Women want to be equal to men – but many of them have moved out from The Right Path in Islam. You said it  brother – following the foot of the husband. How many women still do it and remember what their parents taught them? They have all become greedy and selfish. Even they do not care of the children either – the Filipino housemaids have taken their roles. That is way there is a lot of hanky-panky in the houses nowadays…

Please try to remember always you are Number One to yourself only…most important.  Be like this and see changes
come in. Trust me…happened to me too. I look at her as Mother of my children only I have no soul mate now except Allah only…

You said it so beautiful my dear that my heart broke out for you. I cry in my heart for you. You are great! Keep the mills rolling!

From Another Lady Fan (Omani)

You know men are selfish and think about their pleasures only. They forget that women also need comfort, love, tenderness at whatever age they  are. Women sacrifice everything when they are young so as to keep the family
going.

When they grow up they expect to relax in the company of their husbands who  they grew up together and support to build their life but alas men would think this woman does not deserve to reap what you have cultivate together and look for someone else who had not contributed anything and give her everything and deprive their wives with all their needs. Don’t you think we women have no feelings? We have true love embedded in our hearts, women’s love does not
expire it can stay active forever.

The older they become the more loving they become because the children have gone and needs all their time with their  usbands, holding hands, whispering sweet loving words to each other, joke, caress, enjoy each other, tell stories of the past, remind each other the stupid things you did when you are young, ask each other forgiveness,  remind each other’s mistakes, visit places together, pray together and repent together, surprise each other, spend what you have saved wisely together, visit old friends and take care of grand children and feel wanted, missed and appreciated AND NO MORE HANKIE PANKIES  and the most important thing is accepting each other’s changes of our bodies, and grow up gracefully .

At night going to bed next to each other and saying ”  Take your medication  and I Love you grand pa. I love you now and forever” and the lists goes on and on. This is what a woman wants. Money is not the issue here though it helps.

Take care of your wife and forgive each other. There is nothing sweet like one of us lying sick and looking up at your spouse holding your hand and praying for you when you breath your last breath  telling you ” I forgive you my love”

Are you still there?

You know Majid that happens when the other person knows that she/he is loved and missed. Apedwaye hawachi kujizuzwa (one who is loved is always haughty)  or when she/he is angry. She is just looking for attention. Just ignore us when we ignore you! 🙂

There are many ways to skin a cat. So it is both sides. Not only us women!  Can I ask you? Do you ever suspect your wife? Has she a second person man? If the answers are all NO so why are you afraid and to be like this? I fully agree with you though.

Hey! Why do you write again on this topic? What’s up?

I  had experience this situation with my friend’s daughter. They  were young couple and had young children. They were just starting building a house. Half way way through the money finished and the husband told his wife to take loan to complete the house. feeling that it was their house with children she did that and the bank  transfared the money direct to the husband building account.

The house continued to be built and completed ready to move in. Suddenly the husband had an accident and he was serious at hospital. Everytime he was better he would tell the nurse to call his wife and tell her she had to come immediately he had to tell her something important.

The wife would rushed to his side and the husband would say nothing. He  would look at her and just said he wanted her by her side. This happened twice. The third day the man got worse and passed away.

On the Edda ritual when a sheikh came to read the rites  the father in law broke the news. “You’re not alone. your  husband had a secret wife”

She was an older woman  and can not expect a decent boy could do that. Now urathi! (inheritance) The house was in husband’s name and two wives and children involved. The parents went to court to present the evidence of the loan that she was paying.” If I knew my husband had two wives I wouldn’t have taken the loan. ” which is logic. Gess what ? the court said between a husband and wife gifts are exchanged. this was a gift to your husband and he chose to spend it this way. The house has to inherited by the sheria law!

WOOw imagine! the damage the man you’ve trusted had put you in. Would you forgive him? This  is the the danger here! It’s better to be black and wite before anything happens. You say those dont have rights. they have once the marriage certificate in available and the judges are men who go through the same thing. This man did not dare tell his wife but may be told the secrest to his dad. Which was unfair.

Keep your family dear and dont forget it was your wife’s patient and support that had made you reach this far. If you want to have a nother marriage let her build you up and make build her own boat.     VIE ELEWAVYO
VIMEUNDWA. (Sailing boats were made)

When you have money everybody respects you and when you have no money nobody wants to know you this is what I was talking with nnnn yesterday. Even your blood and flesh dont care anybody since now they have their own families and ignore the parents. Allah Kareem this what brings for us “MTIHAN” a “TEST” to show how strong our Iman is but children forget what you have sacrificed your life for them. Alhamdulilahi.

May  Allah SWT Gives us strength to stand this and take us when we still are capable of taking care of ourselves but never depend on children they have their own life to look into and they do not require parents any more is what they think of that they will not and do not need our help any more.