Life A Mess? Why Blame Your Job? 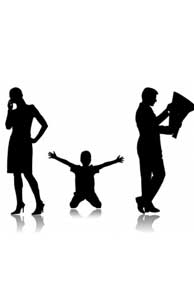 When life is at a crossroad where the conflict between life and your job deepens, who do you blame for? When your options are shrunk to your job, your family and yourself; who do you blame the mess in life for? Most people blame their jobs first, family second and themselves last. According to a new study by Elizabeth M. Poposki, Ph.D., Assistant Professor of Psychology in the School of Science at Indiana University-Purdue University Indianapolis, revealed that sixty-four percent of those surveyed blamed their work first for the conflicts in life.

The study mainly focused on the individual incidents of work-family conflict and explored day-to-day experiences in attributing this type of blame. While twenty-two percent blamed only their family role, five percent blamed external factors other than work or family for the conflict, and only six percent blamed themselves for the conflict. However, interestingly there were no gender differences in how blame was assigned.

The order in which events were scheduled plays a big role while it comes to the reactions to the work-family conflict as the second event, whether work or family related, was more likely to be blamed than the first. However, according to another survey by some psychologists at the Wright State University found that people who are unhappy with their life are unlikely to find satisfaction in their work.

There is a positive relationship between job satisfaction and life satisfaction and revealed that the two are closely linked. It’s said that nearly 90 percent of American mothers and 95 percent of American fathers report work-family conflict. Being at a crucial phase where the middle-class Indian families are given the freedom to dream big as the country is emerging itself to be a leader, family-work conflict is a big challenge to the smooth go.

The new age demands the educational and career aspirations of women while being introduced to the ‘dual-earning couple’ situation. This has resulted in radical changes in the Indian family environment where the normal function patter, activities, responsibilities and commitments have a different meaning.

So it’s high time that we seek options to tackle such conflicts so that a healthy work-life balance is maintained. Often we are faced with such tough situations where we wonder who do we blame it for. So, who do you blame? and if you say you can successfully prevent such a situation, how you manage your wok-life balance?